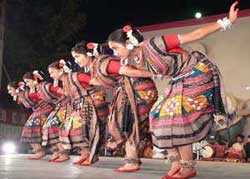 Dance evokes joy and passion even in the dullest and shiest of people anywhere in the world. In Orissa, dance takes the form of worship where imprints of Lord Jagannath and mythology are for all to see - in the narrative, the verses, the music, and even the costumes. Dances of Orissa are in fact celebration of life as a gift from God. Explore the dances of Orissa with Tourism of Orissa specialized tour packages.

Odissi Dance is prominent of all dance forms in Orissa and is the most graceful and energetic classical dance form in India where the intricacies of the narrative are communicated through delicate gestures, symbolic poses and expressive face movements. In particular, the Chauka pose forms the foundation of Odissi dance and is derived from the balanced figure of Lord Jagannath.

Devdavis used to perform this dance behind closed doors of the temples to appease Lord Jagannath, whom they were chosen to serve through their dance and devotion. The Gotipuas, or male Odissi dancers, were the ones responsible for bringing the dance out into the public after centuries of obscurity. The Gotipuas form of Odissi dance and the tableaux of Odissi dancers carved on the walls of temples such as Konark, Brahmeswar and Puri Jagannath are responsible for resurrecting Odissi dance that could have been easily lost with the ruins of the temples in Orissa.

Tours to Orissa are incomplete if you do not attend a Odissi dance recital in Orissa. Manglacharan, Batu, Basant Pallavi, Dus Avatar and Mokshya will leave you spellbound with its energy, grace and beauty.

There are folk dances and tribal dances that you have to see to believe on your tour to Orissa, with Tourism of Orissa tour packages.

Chau Dance is a war dance with firm roots in martial arts tradition of Orissa. Performed by men, its raw power and energetic movements, the interplay of attack and defense, leave an unshakable image of Chau in the minds of tourists on their tour to Orissa with Tourism of Orissa tour packages.

Kathi Nacha (stick dance), Medha Nacha (mask dance), Naga Nacha (Snake dance), and Puppet Dance known as Kandhei (Sakhi Nacha) that are based on stories from mythology, are some of the prominent folk and tribal dances that are worth the time spent at the show on your tour to Orissa.