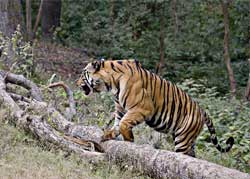 Bhitarkanika, a mangrove wetland in Orissa, is sprawling over around 650 sq km land in the river delta of the River Brahmani and River Baitarani. Travel enthusiasts tour the region to feel the thrill of the stunning Bhitarkanika Wildlife Sanctuary. Bhitarkanika National Park is located in the Kendrapara District of Orissa, and has Gahirmatha Beach on its east to divide the mangroves from the Bay of Bengal.

Due to the immense natural treasure in the state, ECO Tourism Orissa has been booming for the recent years. Tour operators are making available a number of Bhitarkanika Tour Packages for the convenience of the nature lovers travelling to the region.

The national park is an abode to endangered Saltwater Crocodile (Crocodylus porosus), white crocodile, Indian python, King Cobra, black ibis, darters and several other varieties of flora and fauna. The national park was established in September 1998, and was built from the heart of the Bhitarkanika Wildlife Sanctuary founded in 1975. Each year, a number of tourists visit the region which is the second largest mangrove ecosystem in India.