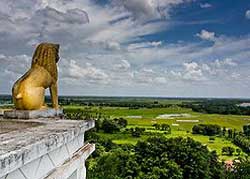 Dhauli Giri, also known as Dhauli, is a hillside situated on the banks of the River Daya, just 8 km south of Bhubaneswar, the state capital of the state of Orissa. Tourists prefer to tour the Dhauligiri Hills to see the wonderful Edicts of Ashoka embossed on a mass of rock, lying beside the road heading towards the hill summit. The historical hill of the Dhauligiri Bhubaneswar Orissa is believed to be the battle ground of the Kalinga War. The most popular attraction in the region is the grand DhauliGiri Shanti Stupa at Dhauli or Peace Pagoda.

As per a paramount legend about Dhaulli Giri Hills, due to the bloodbath happened during the dreadful Kalinga War, the water of the River Daya went red, making Ashoka the Great realize the darkest part of a war and turning him to be the peace propagator. Later, the King Ashoka helped Dhaulli Giri to be a renowned Buddhist centre. The emperor built several chaityas, stupas and pillars in and around Dhauligiri Hills. The worth see spots at Dhauligiri are the splendid Peace Pagoda and numerous Edicts.

Dhaulli Giri is a home to various Rock Edicts like Nos. I-X, XIV as well as two separate Kalinga Edicts. Ashoka wrote "welfare of the whole world" in Kalinga Edict VI, depicting his concern about the mankind. The rock-cut elephant above the Edicts is considered to be the oldest Buddhist sculptures in the state.

Lying on the hilltop, the grand Peace Pagoda or Shanti Stupa was built in 1972 by the Japan Buddha Sangha and the Kalinga Nippon Buddha Sangha.