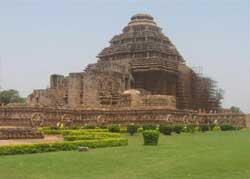 Konark (Orissa) Odisha, a small town located in the district of Puri, is lying on the Bay of Bengal, around 65 km far from Bhubaneswar. Tourist Destinations in Orissa - Konark, well-known for the 13th-century Sun Temple konark dedicated to Sun God, is also referred as the Black Pagoda. The temple, a World Heritage Site, was constructed using black granite by King Narasimhadeva-I (1236-1264 AD) of the Eastern Ganga Dynasty.

Konark Tourism is also popular as Konark is also venue for an annual dance festival – Konark Dance Festival – organized every December, and dedicated to Indian classical forms of dancing including Odissi, the Orissa’s traditional classical dance. Among other popular Tourist Places in Konark is the Konark beach providing an unfelt peace of mind.

Due to these few but impressive attractions, Konark India appears as a very popular destination for tourists from all over the world. The beautiful Konark City possesses all the means you need to have full of fun during your vacations.

So, make a visit to Konark and feel the marvelous ambience of the destination.