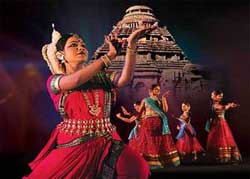 Orissa is a place like no other, a glowing green jewel of a state. On the east, 300 miles (482 km) of gentle coastline are open to the Bay of Bengal, while the high hills and mountains of the Eastern Ghats seal the western borders. In between, lie 96,000 square miles (156,000 sq kms) of peaceful, rural beauty. Orissa is home to three mighty rivers and to the largest fresh/salt water lake in Asia, to dozens of the most sacred places of pilgrimage in India, and to hundreds of thousands of small, traditional villages, in which almost all of her 26 million people live. Only four cities have more than one hundred thousand inhabitants, and Orissa's urban and rural populations alike share a strong sense of the holiness of their beautiful land and of their enduring links with the past.

“Background - Kalinga of the Mauryan age and Utkala of Mahabharata fame, popularly known as Orissa today, boasts of splendid architecture and magnificent beaches.”

Spread over a sprawling area of 1.55 lakh sq kms, it lies in the tropical zones along the eastern seaboard of India. One can find an unmatched blend of rural tranquility with boisterous modern adroitness here. The scenic beauty of the place so much overpowers your spirit that the poet inside you is awakened.

The mention of Orissa dates back to 260 BC, the reign of Emperor Ashoka. While spreading the boundaries of his kingdom, the emperor reached the gates of the then Kalinga and invoked its king to fight or flee. In the absence of her father, the princess of the state took reins and fought bravely with the emperor. The war was a true massacre and the bloodshed that took place moved the emperor so much that his killing instinct was capsized. A warrior was thence transformed into a great apostle of Buddhism. Buddhism followed by Jainism held sway until after the reassertion of Hinduism in the state in 7th century AD.

The Orissan culture and architecture flourished immensely under the rein of Keshari and Ganga Kings at Orissa. A number of masterpieces of that golden era still stand today as mute evidences to a glorious past.