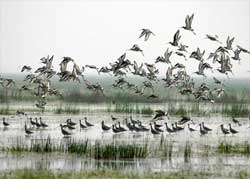 Chilka Lake or Chilika Lake, a brackish water lagoon sprawling over the districts of Puri, Khurda and Ganjam in Orissa, is India’s largest coastal lagoon and the world’s second largest lagoon. At the mouth of the Daya River, the lagoon flows into the Bay of Bengal, and covers an area of over 1,100 sq km. You can spot microalgae, marine seaweeds, sea grasses, fishes and crabs blossoming in the brackish water.

In the peak migratory season, Chilka Lake Bird Sanctuary houses more than 160 species of birds. The birds migrated from the Caspian Sea, Lake Baikal, Aral Sea and other remote areas of Russia, Kirghiz steppes of Mongolia, Central and South East Asia, Ladakh and Himalayas visit the sanctuary. Being the largest wintering field for the migratory birds on the Indian sub-continent, Chilka Lake in Orissa is an abode to numerous rare species of flora and fauna, and also an ecosystem with large fishery resources. The lake maintains over 150,000 fisher-folk residing across 132 villages located on the shore and islands.

Chilka Lake Travel Guide is really vivid and it was in 1981 when Chilika Lake was designated as the first Indian wetland of international importance under the Ramsar Convention.