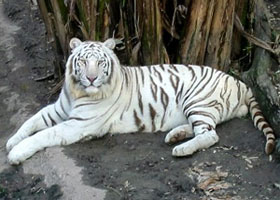 Nandankanan National Park - Located at a short distance from Bhubaneshwar, there lies a miraculous zoo in the splendid environs of the Chandaka forest. The zoo contains a botanical garden with the soothing sound of water of the Kanjia Lake. Due to its being a successful breeding ground for endangered species such as Asiatic lion , Indian crocodiles, Sangal lion, tailed macaque, Nilgiri langur, Indian pangolin, mouse deer and countless birds, reptiles and fish; a part of the zoo has been declared as a sanctuary.

34 aquaria, another part of the zoo is home to a large variety of fresh water fish. The reptiles at the zoo are also guarded well in a park. Its cave like entrance takes the desired care of numerous species of crocodiles, lizards, turtles and snakes who share the park with natural ease.

With 67 species of mammals, 18 varieties of reptiles and 81 species of birds coexisting in the deeply forest boundaries; the zoo enjoys an excellent reputation both nationally and inter nationally for successfully breeding black panthers , gharial crocodiles and white tigers in captivity.

Extensive research and concentrated efforts of the zoo officials have been instrumental in giving a new direction to the existence of White Tiger, one of the rarest creatures in the World. The natural environs of Nandankanan facilitated the mating and the entire zoo got filled with unmatchable excitement and jubilation, in 1980 when the first litter of White tigers were born to Deepak and Ganga, to tawny tigers. Subsequent litters of white tigers have been distributed to zoos both home and abroad. Currently, Nandankanan is home to over 34 white tigers and is famous for its white tiger population. Nandankanan or the garden of Gods offering the most natural and growth conducive environment to these royal animals has become an all time favorite for tourists and locals both.

Just 20 kms from the state capital, the zoo is spread over a sprawling area of 20 kms.